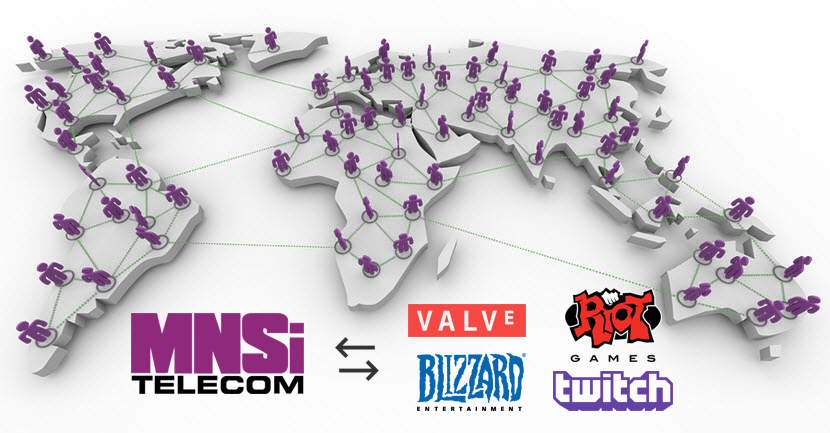 Good afternoon,
For Immediate Release:
MNSi Telecom Announces New Peering Agreements with Major Gaming Companies
WINDSOR, ON (June 13, 2018) - MNSi Telecom has just announced new peering agreements with Valve Software, Blizzard Entertainment, Riot Games and Twitch.tv. These arrangements should reduce latency and improve performance for Fibre customers using those services.
Gamers can be a pretty demanding group. In an environment where even a fraction of a second of lag could be the difference between online life and death, players crave better, stronger and more reliable connections.
Connections need to be fast and dependable to avoid any noticeable stutter. Online play involves sending and receiving data packets in real time – that’s bits and bits of information that will communicate dynamically changing events within a game as they happen - affecting user play across the country or around the world.
One of the best ways to help ensure smooth play is peering. That’s when two or more companies work together to optimize the flow of data traffic between them to facilitate smoother connections. If your internet provider has a peering agreement with an online gaming company, then you’ve got a leg-up as a gamer in your quest for a dependable connection and a better online gaming experience.
MNSi’s new peering agreements with Valve Software, Blizzard Entertainment, Riot Games and Twitch.tv will offer users more efficient downloads, better video streaming and much lower latency when playing games over the MNSi Fibre network.
Gamers also pay attention to the speed of their connection for more than just playing the game – it’s about sharing wins, posting highlights and streaming events. An MNSi 1 Gbps connection is currently the best available speed in Canada – and it’s offered right here in Windsor on MNSi’s Fibre Network. With download speeds of up to 1 Gbps, even the biggest games can potentially download in a matter of minutes, minimizing wait times and getting gamers into the action quicker than ever.
• Valve Software is the maker of the Steam platform and the producers of Half-Life, Counter-Strike, Portal, Day of Defeat, Team Fortress, Left 4 Dead, and Dota 2 games.
• Blizzard Entertainment produces popular franchise games like Warcraft, Diablo, StarCraft, and Overwatch, as well as the stand-alone game Heroes of the Storm.
• Riot Games produces League of Legends, the largest PC game in the world and home of 100 million plays per month in its online eSports community.
•  Twitch.tv is a live streaming video platform that primarily focuses on video game live streaming, including broadcasts of eSports competitions, in addition to creative content,     streams, and music broadcasts.
MNSi’s fibre roll-out is the company's single largest infrastructure buildout since it began in 1995 and provides customers with a direct link to the fibre source. Unlike a cable company’s “hybrid fibre”, which still uses copper coaxial cable technology, or a phone company’s “fibre to the node” service, which still uses old and limited copper phone lines, MNSi’s advanced network brings fibre optic technology with direct fibre lines right to the home and business.
MNSi is a local Windsor-based company that has been providing Internet services to Windsor and the surrounding areas since 1995.  Technical support and customer service teams are based in Windsor, with no offshore or outsourced call centres.
Visit www.mnsi.net for more information.
MNSi Telecom
P: 519-258-2333
E: dsavoie@mnsi.net